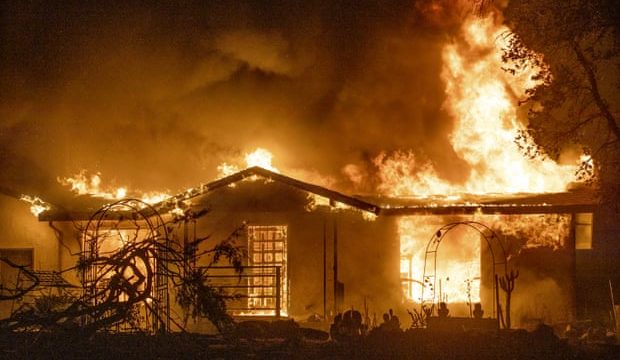 Investigators with the California department of forestry and fire protection have determined that last year’s Zogg fire was caused by a pine tree hitting electrical distribution lines owned and operated by PG&E, the agency said in a statement on Monday.

The investigative report has been forwarded to the Shasta county district attorney’s office, Cal Fire added.

The Zogg fire erupted on 27 September 2020 in Shasta county during high winds. It quickly grew and killed four people in the small town of Igo. It then spread to neighboring Tehama county, scorching more than 88 sq miles (228 sq kilometers) and destroying 204 buildings, about half of them homes.

PG&E officials did not immediately respond to a request for comment late on Monday.
PG&E, the US’s largest utility, emerged from bankruptcy stemming from the financial fallout from several wildfires caused by its utility equipment in recent years. Combined, the fires killed more than 100 people and destroyed more than 27,000 homes and other buildings in 2017 and 2018.

Bill Johnson, PG&E’s then CEO, entered guilty pleas last year on behalf of the company for 84 felony counts of involuntary manslaughter, admitting that it was the utility’s equipment that started the Camp fire, which wiped out the northern California town of Paradise in November 2018.

In 2010, PG&E was found at fault for a 2010 gas line explosion in the Bay Area town of San Bruno that ripped through an entire neighborhood, killing eight and injuring 58 people. PG&E was fined $1.6bn for that disaster, and a federal jury found the company guilty of six felony charges, ordering it to pay $3m in fines.

In 2019, PG&E began conducting widespread preventative power shutoffs during the fire season in regions of California either experiencing extreme fire weather or in danger of wildfire spread.